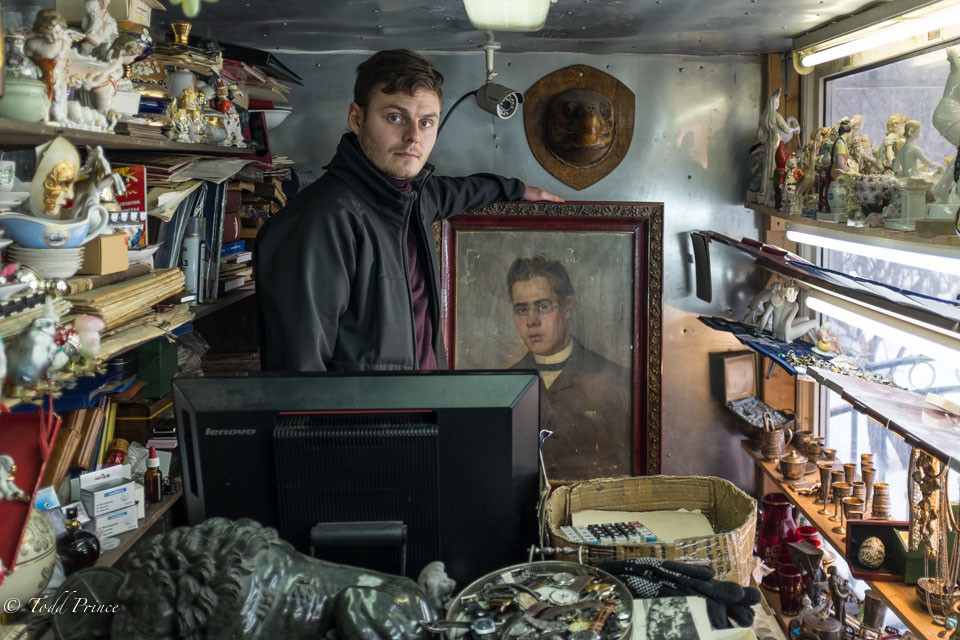 Alexei, 25, works in a small kiosk selling antiques next to a Moscow metro station. He said he first set up a website four years ago with a friend to buy and sell antiques. The business has grown and he decided to open a few kiosks.

Alexei, who sells both Russian and European antiques, said he started the business because he enjoys trading ….much like his dad. ”You meet a lot of interesting people and learn about interesting objects and history.”

Alexei said the crisis is helping his business – people want to spend their devaluing rubles. About 30% of his sales consists of gold and silver objects or coins. Another 20% is porcelain. The rest comes on books and other objects.

That said, he had to close a kiosks in the past. He said the locations weren’t good. One was in a working-class neighborhood with a lot of immigrants from central Asia. He said they were mainly interested in gold and silver, with little demand for his other antiques and thus no need for a large space.

I asked him about his favorite object and he immediately pointed to a large portrait behind him. He said it dates to between 1875-1900.

”This is not for sale. I want to find out more about this paining and this person. I am talking to some experts about it.”

Alexei also sells $2 US bills….for 300 rubles or $5.50 dollars. He said most people don’t realize you can buy them from financial institutions at the central bank rate, or about 120 rubles.

Antiques in Alexei’s kiosk near a Moscow metro.

Alexei holding the 19th century painting that he won’t sell until he knows more about it.