Aniket, 16, was standing near a metro in Moscow dressed in a colorful outfit. He said he was half Indian and half Russian. ”My dad came from a poor family in Rajistan. He was studying and working as a courier, when one day, a friend said to him ‘Want a job in Russia?’

It was right after the Soviet collapse and Aniket’s dad took the opportunity, working about 10 years for a company in Moscow that sold Indian tea. Aniket said his dad met his Russian mom at that job.

Now his dad runs his own business selling Indian tea and spices in Russia, Kazakhstan and Canada. Aniket, who plans on studying economics, said he may help run his dad’s business when he finishes his university studies. 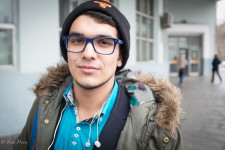 Animate said he will study economics at university

Animate standing near the metro in Moscow