BATUMI, GEORGIA: Irakly & Raul, 54, were heading out to Irakly’s small wood-working shop where they produce such things as doors.

He thought of emigrating, but feels he is too old.

The wood craftsmen differed slightly on the current economic situation in Batumi. Raul said 80 percent of people were facing a tough life, while Irakly felt it was significantly lower.

“There were fewer problems during the Soviet period. We didn’t think about eating. Yes, we now have democracy, but there is no work,” Raul said.

Irakly, though, has done well. He saved money & opened his own shop. He sends his 2 children to an English school. “I do my all so that my children study,” Irakly said to me. 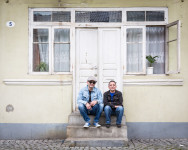 Irakly and Raul were heading out to work.

Irakly said he saved his money and opened own wood-working shop.