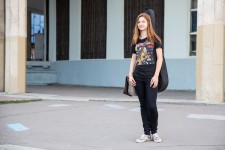 Maria was walking with a guitar on her back and sporting an Iron Maiden t-shirt. For some reason, t-shirts of 1970s-1980s rock groups were popular this year in Moscow (especially among those born way after these groups became popular). Though I think it’s more of a fashion trend that a sign of music taste for many, Maria said she liked Iron Maiden. She said she played the harp for many heard and then moved over to the flute. She doesn’t play the guitar, but was rathering kindly carrying it for her friend. Maria said she really likes physics and may pursue that in university. When I mentioned I switched over to the history faculty after burning out on quantum physics, she pulled a book out of her bag to show me what she was currently reading. It was titled something like “The secrets of quantum physics.”