ISSYK-KUL: We pulled up to a convenience store in a village near Issyk-Kul at around 11am to buy water, but the door was closed. As I returned back to the car, a young boy came running over to open the door. He said he was manning the store for the day and would be working until evening. His parents were probably in the field working, said my driver.

MOSCOW: ''I want to work in my hometown of Samarkand (Uzbekistan)," said Nodir, 21, when I asked about his dreams. "All my friends are there. I want my own small business." Nodir said he has been living about five years in Moscow with his parents. His grandmother takes care of his younger siblings while he and his parents are in Russia. He previously worked at an outdoor market selling fruit until that market was closed a few months ago by the city. Now he works in a convenience store. 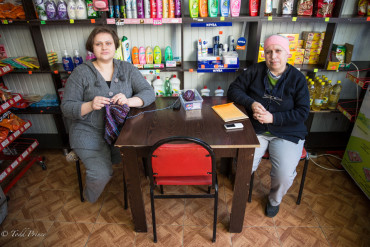 BATUMI, GEORGIA: Marina (left), 32, was knitting baby clothing in her Batumi convenience store as she talked with three older friends. Marina, who is married to a Turkish man, joked it was a little Soviet Union - she is Ukrainian while her friends were Armenian (right), Georgian & Russian. (The Georgian and Russian women left before I could take the photo.) Marina invited me to chat about life, and the USSR of course came up. They lamented the collapse because their is no job stability like there was in the USSR, they said. People can't survive on their pensions, they said. "Life is difficult - we work hard, but have to dress in second-hand," said Marina, her Armenian friend adding, "We had a life then. Now we simply survive. Ask anyone my age and they will tell you the same thing."