You rarely see middle-aged, Russian women dressed like this. Thus, I thought Bozhena may have an interesting story to tell. She said she lived in a small, historic town in Russia's Northwest with her husband and five children. A painful divorce left her with nothing, so she moved to Moscow, got a job, earned a decent salary and brought 4 of her 5 children to the city (the other wanted to stay with dad). The high cost of credit (double figures for mortgages) and nominal rise in Moscow home prices has hampered her ability to buy a flat, so she continues to rent.

Owning a small dog has been trendy in Moscow the last few years, but I don't often see owners taking them into the metro. This couple was returning from a park late in the evening and allowed me to photograph them.

Why are you taking photos?" he asked rather suspiciously as I photographed my homeless neighbor Rasul. I thought I was in for some trouble. I explained my story and then said ' I would llovevto take your photo as well." He refused, but continued to ask me questions. We discussed the USA, NYC and Russia. After 15 minutes, he said I could take his photo and he told me his story - one that I have heard a dozen times. He comes to Moscow regularly by car from the economically depressed North Caucasus to work for weeks or months at a time, sending the earnings home to his wife and children. His dream was to earn enough to by a 'decent car.' I asked if the dream was materializing. "It's not really working out - everything here is expensive, especially food that I barely have something to send home. 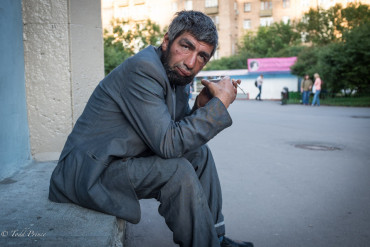 Rasul, my ‘neighbour,’ was in a bad mood when I spoke with him. He said someone has stolen his pillows earlier in the day. Rasul told me he grew up in the former Soviet state of Azerbaijan and had previously worked as a handyman, doing repairs on people’s apartments. Now he is homeless, sleeping during the summer in a patch of grass in front of my building with other homeless people. Rasul's friend later told me someone gave him new pillows. The city recently spruced up that patch of grass, adding flowers, so Rasul and friends can't sleep there anymore. I saw him earlier this month crossing the street. He was holding something inside his coat. I asked him what he had…. 3 large rocks from a nearby construction site. He said it was to protect himself. 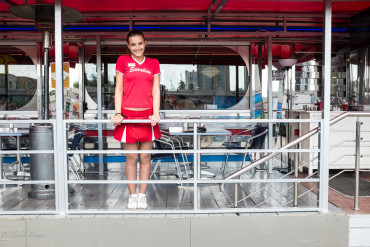 One consequence of the growth of cafes and restaurants in Moscow is that it creates first-time jobs for high school and college students, especially those students from other regions. This Moscow State University engineering student comes from Western Russia and works at a 1950s-style American diner. She said most of her co-workers are students from other cities. She said she hoped to continue her studies and find work in Russia's oil and gad industry. 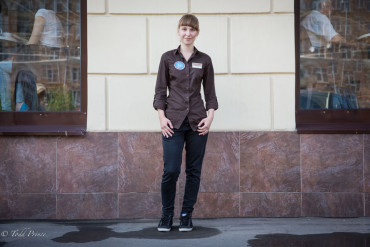 Moscow's food service industry still gets a bad rap, but service quality has improved significantly over the years in my view. Vika, a high school student who works at a coffee chain, is a good example of the better service. On the job only a few months, she says it can be tiring being on your feet all day, something I know from my days at a chain in NYC. The other problem she notes are the occasional drunk customers that give her extra attention.