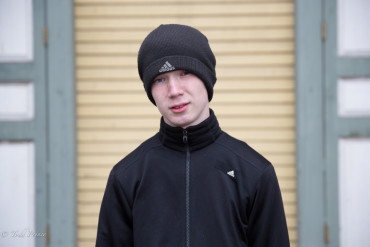 Irkutsk: Aslan, 16, was smoking a cigarette near some old wooden homes in Irkutsk, dressed in an all black sport outfit. He said he was born in Grozny, Chechnya in 1998 and immediately moved with his family several thousand kilometers to Irkutsk. Did his parents sense something or was it luck that they moved in 1998? A year later, Grozny would become a horrific war zone. Aslan isn't quite sure what path his life will take - he says he is interested in the medical and oil industries - but he knows where is life will end. "Grozny is my hometown. I was born there and I will die there," he said with pride. 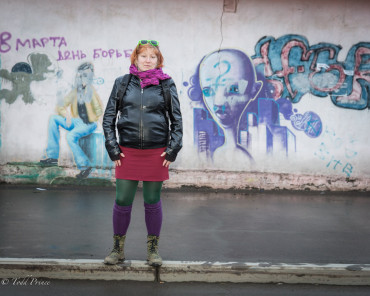 IRKUTSK, EAST SIBERIA: The weather in Irkutsk on a recent weekday couldn't have been any grayer...and Sasha, 31, couldn't have been any more colorfully dressed as she walked through the city. With her maroon skirt, green leggings, purple socks, pinkish scarf and light green sunglasses, this Linux systems administrator stood out from the crowd. She said she was on her way to meet friends to 'celebrate' receiving her new passport post a divorce. I asked her about trends/developments in Irkutsk. Sasha said she has noticed more bicyclists around Irkutsk and plans to join them. She also said she noticed more so-called 'Yogis,' or or people leading a more healthy lifestyle. Her comments have confirmed the same trends in nearly every city I visited. Sasha said she is also interested in tattoos, has half her back covered in them and hopes to add more. She also dreams of visiting Chile. 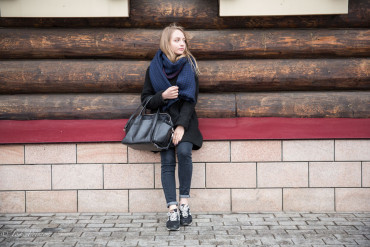 Arina, a 16 year-old Coldplay and Haruki Murakami fan from Angarsk in Eastern Siberia, is an example of how Instagram can break down barriers of distance and language and create opportunities for people. The popular teenage blogger using the name @sleepnovember now gets business inquires to promote clothing or goods.

Arina, who would need to drive an hour to Irkutsk airport and then fly six hours to get to Moscow, expressed frustration that she lives ‘’far from the rest of the world.’’ Change and trends ‘’come to us last’’ in Siberia, she said.

Over the past two years, she has used Instagram to see the world and promote herself to an international audience. ‘’I have met a lot of fantastic people and it has really widened my horizon,’’ she said. 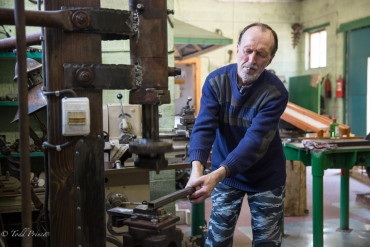 LAKE BAIKAL: Yura, 51, was surrounded by several machines as he studied sketchings of church crosses in a ‘blacksmith shop’ near Lake Baikal. He and his father-in-law are helping restore several churches in Irkutsk region, including one dating from 1691. Yura, who loved repairing radios as a boy, said he prefers doing the metal work, while his father-in-law specializes more in the wood work. He showed several wooden icons waiting to be painted. The icons will eventually be sold in the church next to Lake Baikal that Yura and his father-in-law are also repairing. That church, dating back to 1844, will take three to five years to fully repair, Yura said. They have recently put new wooden frames around two of the three windows. Yura said he grew up in the Urals region, was a thermal power engineer for many years, including serving a brief stint in Mongolia. He then worked in Baikal's hotel industry before turning full-time to metal and wood work. "I was tired of the [hotel] work. My heart lies in this," he said, pointing the sketchings that will eventually be turned into metal crosses. I asked how he got into metal work considering his engineering background. "It probably came from my father," he said, adding his dad studied metal work.

Irina, a school girl from Irkutsk, stuck out from the crowd with her long red hair, blue-green eyes, freckles and smile. She was visiting a museum site near Lake Baikal that contains historic wooden architecture. Irina had come to the complex with family and friends on Easter Sunday. They brought along Easter eggs, bread and kolbasi to celebrate as they walked around the large premises.

Andrei, 34, was working on a computer in the kitchen of a hostel in Ulyanovsk, about 4,000 kilometers from his home town of Angarsk near Lake Baikal in Siberia. A father of four children, including two step-children, Andrei said he has completely changed his life over the last few years. He said he quit smoking three years ago, then drinking and  his full-time office job as an accountant. He also said he changed 95% of the people around him to ensure he didn't resume the bad habits. ''Your lifestyle depends on the people around you,'' he said. ''I feel great now.'' Andrei now travels around the country to buy used cars from bankrupt or distressed companies and resell them. He said he prefers having the freedom of working for himself. Andrei, who regularly jogs in the morning, said his future plans include having another child.