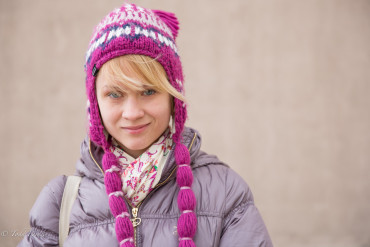 Yulia was walking along Moscow's ring road wearing a purple-colored jacket and boots and carrying a guitar. She said she is a translator of movies from English and Spanish into Russian and also teachers English at a university. Yulia said she is following in the footsteps of her mom, who also translates from English and Spanish into Russian. But Yulia also takes a bit after her father, a professional musician who plays the guitar. Yulia is bass guitarist in a group that plays 1960s British and American soul music, including Wilson Pickett and Aretha Franklin. Yulia said she is studying Portuguese and that her dream is to translate a Brazilian TV series into Russian.