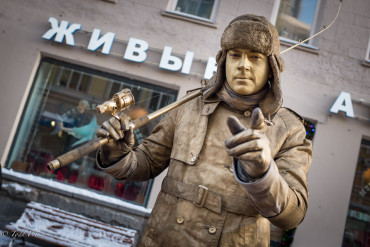 When it is cold outside - like it was in Moscow today - you need to keep moving to stay warm. Thus, Vlad's weekend job as a Moscow street performer wasn't easy today - his goal was to pretend to be a statue of a fisherman and pretty much stand still over the course of a few hours. A metals trader who studied atomic power station construction, Vlad said he likes that his statue performance ''makes people happy and makes them smile.'' 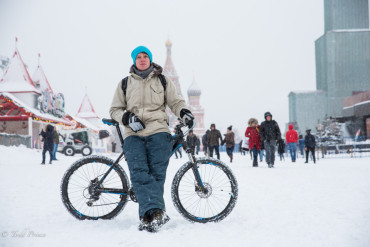 Igor, nearly 30, was crossing Red Square on his bike amid a heavy snow storm right before New Year's. A former gym trainer with more than five years experience, he said he had biked about 7 km to Red Square and planned to bike the rest of the day. He said he planned to spend the New Year's night biking around Moscow with his new girlfriend ... just like he did on Dec. 31, 2013.