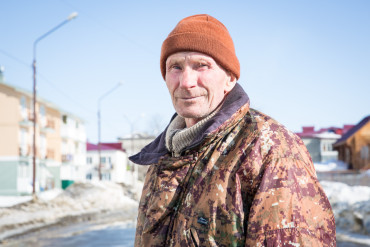 Yuri, 67, said his dad was from Ukraine and his mom from Siberia. They met and married in Vladivostok and moved to the Kuril Islands off Japan in 1947 after WWII to help develop the new territory. When he was eight, his family moved to Sakhalin Island. His parents had five children. Yuri said he played war games and cops and robbers with his siblings and friends. He also went fishing with his dad, something that has become a passion. ''I love fishing. If I can't fish, there is nothing for me to do.'' However, he said his younger brother, who still lives on Sakhalin, doesn't share his passion for fishing.  Yuri said he was a construction worker on Sakhalin and built housing projects. Now he is a pensioner, spending his days fishing. ''Tell me, who receives a pension that is enough?'' he said, when asked about retirement benefits. ''Prices have been rising. The monthly communal housing costs are quite high. '' 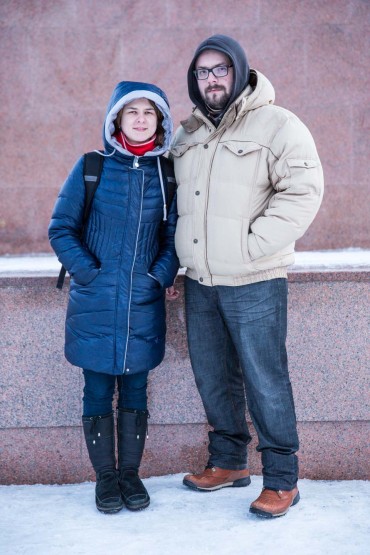 Lyumila and Pavel, 29, were looking for pigeons in the central of Yuzhno-Sakhalinsk late on a Thursday. Lyudmila is one of the many young specialists invited from the Russian 'mainland' to work on Sakhalin, where the pay is high due to the remote location. Pavel, her husband, supported the temporary move. ''I told her its a great opportunity, a chance to gain valuable experience,'' he said. ''And it was a chance to visit the far end of Russia. Sakhalin is beautiful. You don't get this kind of winter in central Russia.'' Pavel said he is taking advantage of Sakhalin's snow and mountains by picking up snowboarding since he and Lyudmila arrived seven months ago. The couple plans on moving back, though, to Nizhny Novgorod when Lyudmila's contract is up to be close to family and friends. Pavel, the son of a military officer and teacher, said he is developing a project with friends back home and works from the apartment in Sakhalin. He and his friends hope to raise money via crowd sourcing to finish their project. 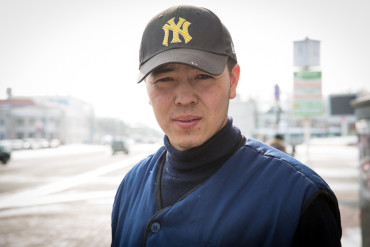 Migrants from central Asia not only head toward Moscow and western Russia for work. With Russia trying to develop its Far East provinces, there is demand for construction workers in the region. And due to the tough environment and remote location, pay can be relatively high. Alik, 22 and a native Kyrgyz, was walking in the center of Sakhalin with his NY Yankee hat and work uniform. He said he was a construction worker for Russia's state rail company and has been living on Sakhalin for five years. He followed his dad, who has been working on Sakhalin for about 10 years. Alik's sisters live back home in Krygyzia. Alik said that he likes Sakhalin's nature, has a stable job and hopes to buy an apartment on the island. He said he already has a Russian passport. 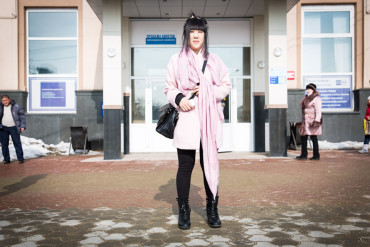 She was running an errand at the Yuzhno-Sakhalinsk post office wearing a pink coat and long pink scarf, black leggings and high tops. She had blue eye lenses and her finger nails were painted in different colors - green, yellow, blue. She said he was of Korean ethnicity and grew up on Sakhalin, one of many ethnic Koreans here. She has visited relatives in Korea. I asked if she spoke Korean. ''I don't speak very good Korean because I grew up here speaking Russian.''

One of the first things that jumped out as I walked around Yuzhno-Sakhalinsk was the number of people walking with baby carriages. This is most notable in the city's park, where I saw at least a dozen mothers and one dad walking their new borns. As one man told me, Sakhalin has been attracting young specialists from the Russian 'mainland' because of higher salaries and chance for an interesting experience. This young mother was walking her child in a baby carriage around sunset in the center of Yuzhno-Sakhalin. She said she was born on Sakhalin and has ''no plans to leave. I love the nature and life here is getting better. I think life on the mainland is more difficult.'' She also wants to be around her family and friends on Sakhalin. She said she didn't think about how difficult it might be raising a child - especially in a cold climate - until she had one. ''I probably won't have another child any time soon,'' she said. ''A baby needs constant attention. It is physically and morally exhausting.'' 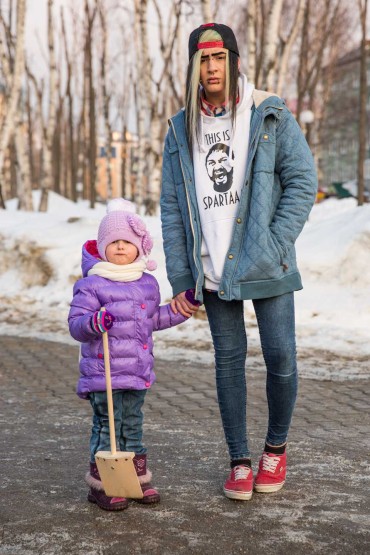 Sporting long, multi-colored hair, several facial piercings, penciled eyebrows and sneakers, Ilya, 16, was not someone I expected to meet on the cold, oil and gas region of Sakhalin Island. The teenager, who was taking his three-year old sister to the playground, said he attracted a lot of unwanted attention. ''It is difficult, but I am used to it. My mother is supportive [of my style], but not my father.'' Ilya said he has some Spanish roots and that his family was moving to Spain in a few weeks. While he said he was happy to leave Sakhalin ''as there is nothing for me to do here,'' he doesn't want to live in Spain either. ''I would like to live in Moscow or St. Petersburg,'' said Ilya, who wants to pursue a career in fashion. 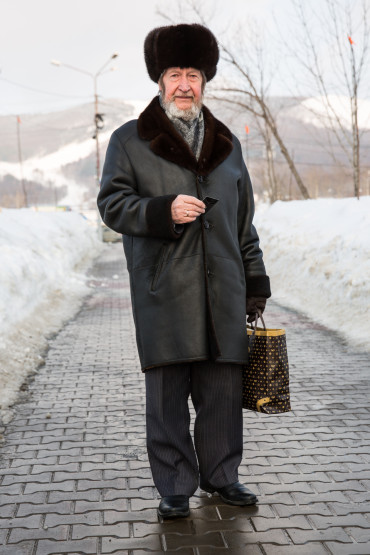 Sakhalin: He was walking in the center of Yuzhno-Sakhalinsk in a traditional Russian winter hat around 5pm, perhaps returning home from work. He said he was born in Sumy in Eastern Ukraine, studied medicine at Moscow's top medical university and interned there as a paramedic. For the past 37 years, he has been working as a physical therapist on Sakhalin Island, a Russian oil and gas province in the Pacific off Japan. 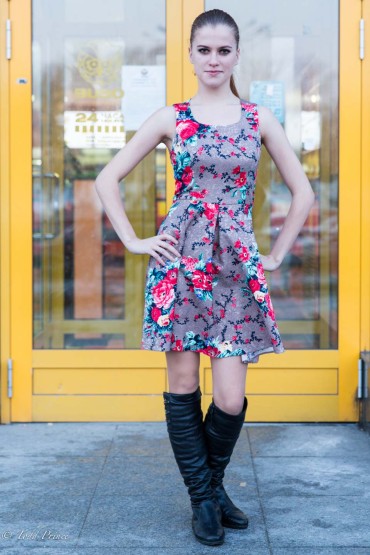 Angelina and her friend were sitting in a fast-food burger join, a sort of McDonald's equivalent for the distant island. Both were dressed in fashionable outfits, so they posed for photos outside the fast food spot. Angelina said the two study together at a local college and specialize in organizing cultural performances. Angelina said she would like to work in the modeling industry while her friend would like to sing. Her friend already sings on stage. I asked Angelina if she would like to leave Sakhalin. ''Maybe I will give it a shot in a big city and see how I do,'' she said. ''But, nonetheless, I would return to my native region. Sakhalin is a unique Island.''