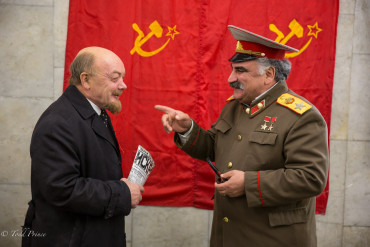 Moscow Portrait: One popular Russian film goes by the title "Irony of Fate," something that could be applied to Sasha's life. Born in Perm in the Urals, he said he served nine years in part for anti-communist actions. Now he makes a living portraying the man who personifies of Russian communism: Lenin.

Latif was a big-rig driver, hauling goods, including wine from his native Georgia and apples from Iran to Russia. He said his work travels also included Germany. For the past five years though, he has been hanging around Red Square dressed as Stalin, earning about 100 rubles per photo with eager tourists. Latif says he goes home every two months for two weeks at a time to see family. The father of four said his wish is simple - to see his children and grand children do well. When he hangs up his Stalin costume for good, he says he will likely head back home to his native village in Georgia.