Vladivostok: ''We are enjoying the sun and the moment,'' said the musician on the left, when I asked these guys what they were doing for Valentine's Day. He said the three were collaborating on a hip-hop album and ''want to conquer the world.''

Nikolai, 25, was offering pedestrians tulips from the back of a car in the center of Vladivostok on Valentine's Day. He had bought 200 hundred tulips from a local producer and sold about 180 by the early evening, pocketing a nice profit. A former worker on a fishing trawler, he said he would like to open a chain of butcher shops because he sees weak competition and strong demand for meat. The current competitors don't understand marketing and he felt he could grab market share. He added that he is part of ''a trend of young people trying to start their own businesses.'' I asked if his parents were involved in food retail as well. He said was born at the end of the 1980s, during a very tumultuous period in Russia's history, and was raised in a village by his grandmother, who has since passed away. ''There are many of us in Russia,'' he said, referring to orphans.

Vladivostok: Sergei and Lyubov were walking together in the center of Vladivostok on Valentine's Day, both wearing what looked like hiking backpacks. They said they met a month ago in Vladivostok via friends and ''have many things in common, including biking, hiking and outdoor tourism.'' They plan on visiting a cave in the region later this month, while their longterm plans include visiting Kamchatka, Sakhalin and Tibet. 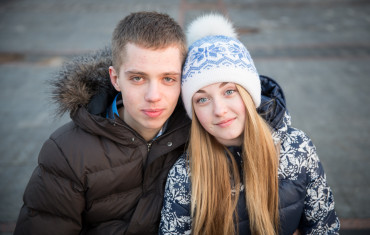 Vladivostok: Timofei and Dasha, Vladivostok teenagers, were sitting by the shore as the sun set, taking in the beautiful view like many other couples. Timofei said they met a month ago via Russian social media - like so many others I have met lately. Russians normally give flowers on such a holiday, but I noticed that Dasha wasn't holding any. ''The most important thing [in a relationship] is not to be banal,'' Timofei said. ''You have to do something original.'' Apparently, he had something special planned for Dasha. 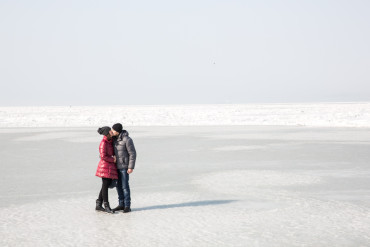 Vladivostok: It was unseasonably warm on Valentine's Day in Vladivostok with the temperature breaking above zero Celsius and the sun shinning bright. That didn't seem to worry these two young lovers, who walked, ran, hugged and kissed on the ice for a good half-hour. They said the ice normally remains thick enough to stand on until the end of February. They exited the ice safely. 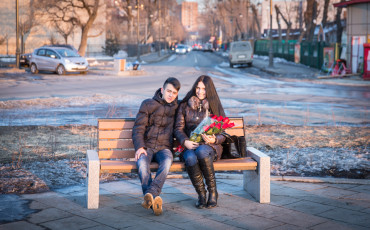 Artem and Yulia were slowly strolling along the seaside in Vladivostok at sunset on Valentine's Day eve. Yulia was carrying a bouquet of nine roses. They said they met via Russian social media about two weeks ago and had been writing each other since them. Today was their first date. ''I don't normally meet people through social media,'' Yulia said. ''He was lucky.''