TBILISI, GEORGIA: Anton, 32, recently opened a small pizzeria in a narrow alleyway right off one of Tbilisi’s main streets. The spot is about 15 square meters in total and can seat two people.

Anton, who studied cooking in his hometown of Kharkov, said he has been in the pizza business for about a decade.

During the summer, he runs several pizzerias in Crimea with this business partner.

However, he feels businesses in that disputed territory will be disappointing this year due to the economic and political crisis, so he decided to give Tbilisi a shot.

Anton named his pizzerias Palermo 7. The seven signifies the day and month he was born: July 7 or 7/7.

Anton said 7 is a lucky number and thus had his back tattooed with Roman numerals for 7. 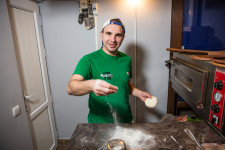 Anton recently moved to Tbilisi to open a pizzeria with his Ukrainian business partner. 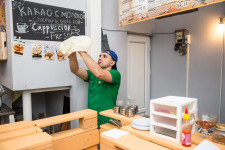 Anton said he had 3 pizzerias in Crimea during the summer. 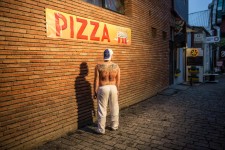 Anton has VII, the Roman numerals for 7, tattooed on his back.