Arina, a 16 year-old Coldplay and Haruki Murakami fan from Angarsk in Eastern Siberia, is an example of how Instagram can break down barriers of distance and language and create opportunities for people.

Arina, who would need to drive an hour to Irkutsk airport and then fly six hours to get to Moscow,  expressed frustration that she lives ‘’far from the rest of the world.’’ Change and trends ‘’come to us last’’ in Siberia, she said.

She says she has used Instagram to see the world and promote herself to an international audience since signing up two years ago. ‘’I have met a lot of fantastic people and it has really widened my horizon,’’ she said.

A latte lover, Arina said she might go through her Instagram feed while having breakfast to see posts by people in the US and Europe. ”It is like news, but only more accessible.”

Arina registered on Instagram two years ago and initially followed just her friends in her town and shared with them ‘frivolous’ photos.

”It is rare when people here are interested in Instagram in a wider sense,” she said. ”It is only at a beginning stage.”

But, Arina, a top art student, said she happened to come across some popular foreign and Russian Instagram accounts that inspired her and totally changed her view of Instagram.

She said she began to focus more on composition, lighting and began blogging her thoughts and views. She engaged her followers with questions.

Arina said she wanted a big following, so she used SFS (shout out for shout out) and contests to boost her numbers, sometimes using Instagram as often as two hours a day.

As she turned 16, her followers had risen to 14,000. Arina said she stopped the SFS and began to cut down her time on Instagram, but the followers continued to roll in. And so too did the companies seeking to tap her active followers.

With nearly 50,000 followers today, Arina now gets business inquires a couple of times a month to promote clothing or other goods.

‘’I never thought I would earn money from it. I started it as a hobby,’’ said Arina, who added she isn’t ”chasing after business.”

Arina said one of the most interesting inquiries was from watch maker Daniel Wellington. The company sent Arina a watch in exchange for promoting their brand on her page, something she willingly did as ”it is my favorite brand.”

She said she is interested in studying design or journalism at university and that her Instagram experience gives her confidence that this is her calling. She would like to study in St. Petersburg or Prague, she said.

Arina, who walks around town in black New Balance and is sometimes recognized on the streets, plans to launch her own website called ‘sleepnovember’ to compose longer blog pieces.

She said she initially wanted to name her Instagram account SweetNovember after one of her favorite films. However, that Instagram name was already taken. So, she picked a name that sounded similar. 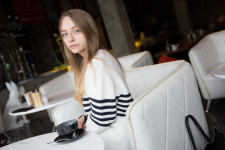 Arina said she would like to study in St. Petersburg or Prague. 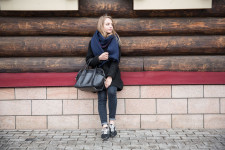 Arina lives in Angarsk, outside Irkutsk in Eastern Siberia. 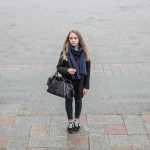 Arina said she is a fan of Cold Play and Haruki Murakami.