MOSCOW: Aslan was wearing a New York Yankees baseball cap as he waited for the metro with a group of friends.

Aslan said he grew up in North Ossetia but has been living in Moscow for many years  He studied economics, but when he graduated he realized it wasn’t his calling.

He says he would like to live ”where the sun shines,” but can’t now can’t image living far away from the noise of a megapolis.

”Over the last few years, my life has really changed and, for the most part, I am to blame. I left a lot to chance. By the time I came to my senses, I realized it was too late,” he said.

”I let a lot of opportunities go by. Now I am trying to get things going, trying to find myself and my calling. But it turns out that it is either very difficult or requires a lot of money, which I don’t have.” 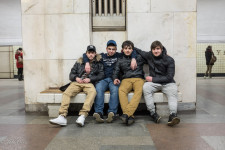 Aslan with his friends in the Moscow metro. 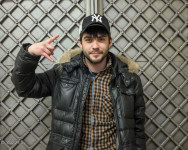 Aslan grew up in North Ossetia.