Sakhalin: I was invited by Dmitry, a 45 year-old Sakhalin fisherman for tea at his home. As we pulled up to his standard grey, Soviet-era building, I expected to see the usual, depressing entrance of such buildings.

However, the entrance and first floor walls were covered in various flower designs and a Mickey Mouse figure.

I asked Dmitry who drew the paintings. ”My granddaughter,” he answered. Was this some kind of government program to improve the building, I asked? ”No, she asked if she could pain it and I said sure as long as you don’t paint any bad words,” Dmitry answered.

I ask his 11 year-old granddaughter Diana, named after Princess Diana, why she asked to paint the wall. “I wanted an entrance that was colorful and happy and not like all the other buildings.”

Russians often complain about their housing conditions, but rarely take action to change them, choosing to wait for government agencies to attend to problems. Diana’s actions were unusual.

Diana, who studied art, says she would like to become an actress and study in Moscow.

While Dmitry and I talked in the kitchen, Diana watched Youtube videos to learn how to use Rainbow Loom Bands, highlighting the power of the Internet to help reduce the disadvantages associated with living in small towns far from big cities.

Diana standing in front of the wall she painted with flowers and Mickey Mouse. 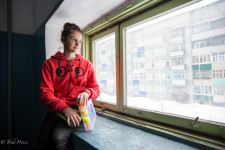 Diana looking out onto the grey, Soviet-era houses across the courtyard. 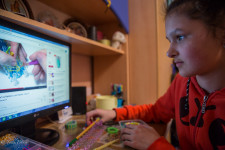 Diana learning how to use Rainbow Loom Bands by watching Youtube videos.