TBILISI: Tattoos can say a lot about people and their interests.

Giorgi, 19, was hanging out with two friends near the center of Tbilisi. Giorgi said he would like to become a ranger in the military, but that he was rejected because of his tattoos.

He took off his shirt to show them. He had a tattoo on his right arm of US weapons specialist Chris Costa holding a machine gun. The tattoo was in the style of an orthodox icon.

On his left arm, he had what looked like Mother Mary holding a machine gun.

Giorgi said he has been interested in the military from childhood and that his favorite movies include ‘American Sniper’ & ‘Saving Private Ryan.’ 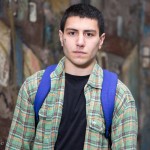 Giorgi also has a tattoo of a cross under his right eye.

Giorgi showing the tattoos on his arm that caused him problems with the rangers.