CHITA, EASTERN SIBERIA: Irina, 22, was hanging out with her friend – also named Irina – in front of a Chita university dormitory on a weekday afternoon. Both said they were studying to become teachers.

Irina, left, said she grew up in a small village situated on a hill in Chita region and from the age of seven would go skiing with her cousin.

“We would pretend to compete with each other,” she recalled. “That is probably why I chose physical education.”

Irina said she will finish her teacher studies next year, but will not pursue education because “teachers don’t earn much.”

Instead, Irina said she will enlist in the army and that her family supports that idea, pointing out that women aren’t sent into hot spots to fight.

Russia has raised wages of teachers, doctors and military significantly over the past decade. But according to locals in Chita, where there are many military personnel living, the armed forces have seen a bigger increase.

This, the locals say, may explain why there is a lot of housing construction at the moment in the city. 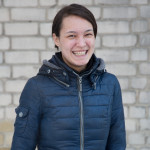 Irina grew up in a small village outside Chita.