St. Petersburg: She would have fit in perfectly at a rockabilly concert with her red and white poker-dot skirt, a blue bandana in her hair and black converse sneakers.

Instead, she was reading Machiavelli’s ‘The Prince’ while making espresso’s from the back of a coffee car in one of the busiest spots near Nevsky.

Just 21, Sasha said she already divorced and is now in her fourth city, having grown up in Murmansk and lived briefly in Krasnodar and Moscow.

Her colorful style contrasted sharply with her mood, which is reflected in her facial expression in the photo. Even a surprise rose couldn’t cause a smile.

She said people criticized her everyday and mentioned she didn’t have a high opinion of herself, adding she has a bad temper.

She said she is hoping to find herself.

I asked about Moscow. She responded she didn’t like city probably because she worked at a funeral home.

Sasha was making coffee from the back of a truck while reading Machiavelli. 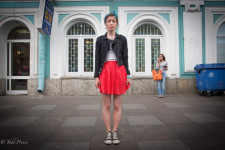 Sasha grew up in Murmansk and lived briefly in Sochi and Moscow before moving to St. Petersburg.