YEREVAN, ARMENIA: This 84 year-old Armenian, born in the disputed territory of Nagorny Karabakh, was playing chess with two men half his age at his summer house.

He said chess is good for your health, so I asked what he meant. He said it keeps your mind sharp and if your mind is well, then your body will be well.

You can argue with his logic, but he is the only one of his mother’s 9 children still alive. The 1st one died in WWII. “He didn’t return,” he said of his eldest brother.

An economist by education, he likes talking global economics and spits out random facts like the square meters of China, the US & Russia.

His youngest grandson wants to be an economist as well. 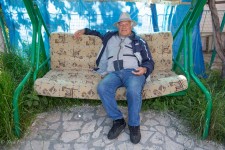 Tarkan is one of nine children, but the only one still alive.