As I strolled near the outdoor food market in Mogilev-Podolsky, a small, west Ukrainian town, I passed 14 year-old Andrei, a high school student wearing a winter hat with the Ukraine coat of arms on it. I wasn’t too surprised to see someone wearing such a hat in this town considering there were Ukrainian flags all around town. Nonetheless, I wanted to ask Andrei why he chose to wear it. He said it was a sign of support for his country, adding that his family had been directly impacted by the war.

He said his uncle – a 35 year-old construction work and a father of two – was mobilized to fight in the east. During a battle, his uncle was shot in the leg, caught and taken prisoner. Two days later, he was exchanged for other prisoners….but not before gangrene set in. He lost his leg.  (Andrei sent me an article about his uncle with photos of him using crutches to get around.) Andrei said his father is now helping his uncle learn to walk with the artificial leg and going to the store for him. Andrei’s dad has been traveling back and forth to the capital Kiev to see if his uncle will be given a medal of honor, something that may imply a higher compensation….which the uncle will need to take care of his two children.

Andrei is not only showing his new found patriotism via clothing. He emailed me a few days after our random encounter to share a poem he had penned and posted on his social network. ”Ukraine – we are your children and you are our mother. We will not let you be insulted,” is how he finished his poem. As the fighting continues in Ukraine, there will be more Andreis  telling such family tragedies and writing such poems. 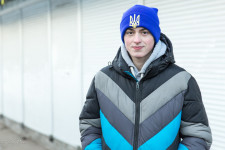 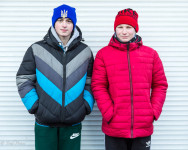 Andrei and his friend