Vlad, 32, was taking a smoke break after work before heading home. He said he had just finished cleaning some buildings of snow. His backpack weighed about 20 kilograms, if not more.

Vlad said he bought equipment worth 25,000 rubles ($400) while others use equipment worth 15,000 rubles, something he considered to be risky. He said people without insurance or proper equipment are sometimes hired, including to clean government buildings.

”I sometimes see courtyard workers cleaning buildings with nothing more than rope. Officials only make noise when someone [without proper equipment/insurance] falls and dies.”

Born into a military family in the Far East of Russia, Vlad moved with his family to Ulyanovsk after the collapse of the Soviet Union. He said they picked Ulyanovsk because his grandmother lived there.

Father to an 11 year-old daughter, Vlad said he likes Ulyanovsk, but would like to see more outdoor cafes. ”There used to be about 15 cafes near the riverside and now there is only one.” 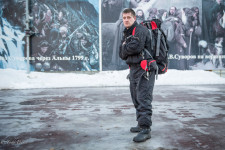 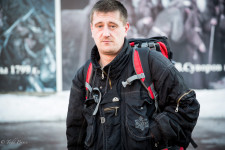 Vlad said he would like to see more outdoor cafe’s along the riverside.