Voldemare and Tanya were having a smoke outside their store in Rostov, where they sell clothing and accessories from India and southeast Asia.

Voldemare said he got into the business accidentally….During a trip to Asia, he bought a bunch of goods and gave them away to friends when he returned home. Two and a half years later, he opened up the store.

One of his customers was Tanya, who stopped in because she liked the bright colors. ”I bought something and we started to talk. We found a lot in common.”

A few weeks after I met them on the street, they flew to Southeast Asia…where they got married. 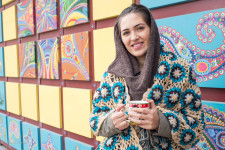 Tanya met Voldemare at the store.