CHITA, EASTERN SIBERIA: Denis was one of those lucky Russians that made a killing during the 2000s, when Russia’s economy nearly doubled.

A programmer from Chita, he was asked to help with a some local political agitation work. He said that led to a full-time job from a solid company, lucrative salary, hard assets and lots of leisure travel.

We could fly to Sochi for a day to swim. We didn’t care about money.”

He said the ”easy money spoiled” him.

Now, Denis is putting his money to work in the Siberian service sector despite rising unemployment and recession. Denis recently opened Chita’s first barbershop. He plans a similar woman’s shop and then a restaurant with bar.

His target audience is people 25 t0 40 that work, have families and ”can spend money 1 or 2 times a month on their looks and an evening out.”

”People still need to eat, relax and take care of their looks,” he said, referring to the recession.

Denis said Chita is experiencing an influx of people from surrounding villages and an outflow of native city dwellers to bigger, Siberian cities like Novosibirsk and Krasnoyarsk. That is leading to a growing ”village mentality” in Chita.

”We need to change the mentality in the city,” said Denis, who regularly jogs and gave up drinking. ”People are waiting for something from the government. How does change begin? With yourself.”

He said he hopes his barbershop will bring a bit of culture to the city in addition to profit. 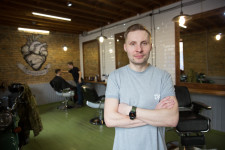 arbershop will spread a bit of culture to Chita. 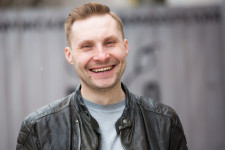