ULYANOVSK: Emilia, a psychology student, was leaving her university that lies directly across a square from the Lenin Museum. She was dressed in all black, except for her light-colored sunglasses.

Emilia said she got into hard rock and gothic music such as Marilyn Manson at the age of 15, something that has influenced her fashion style.

Raised by her grandparents, Emilia said she has about 6 tattoos on her body. She also has two small ones – a heart and bow – on her neck, which she says are meant to symbolize a friendship of 12 years. Her friend has the same two tattoos.

Her grandfather, a former prison warden, has a negative opinion of tattoos due to the previous association of tattoos with the Russian criminal world, she said.

Fluent in English, Emilia said she has spent quite a bit of time in the US and the UK.  She said she was surprised by the number of yellow taxis in New York. However, based on films about New York, Emilia expected the city to be more crowded.

I asked what she thought of Lenin, who was born in Ulyanovsk.

”There is too much of him here,” she said referring to the number of monuments and museums dedicated to him. 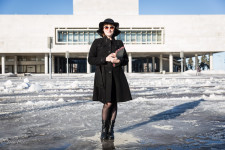 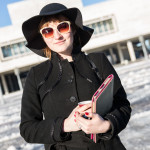 Emilia is graduating this year with a degree in psychology.