MOSCOW: ”One night my parents were screaming at each other when police with machine guns on their shoulders appeared right before my eyes and took my father away. It is still scary to remember the events of that day. As my childhood coincided with [the difficult] 1990s, we had problems with food and clothing.”

”My mother had to work a lot to feed me and my brother. Due to her young age, she spent her free time taking care of herself,’’ said Lira, 24, who organizes outings for youth in the EMO subculture in her free time.

”As a result of my poor appearance and broken family, I was teased on a daily basis. It was very difficult – I didn’t have parents, friends, absolutely no one to talk to and share my troubles. As I grew up, I saved money and as soon as the chance appeared, I would go to another city for a few days to enjoy life.’’

“I left school after ninth grade, went to a techical school and life began to change. The Internet appeared, I began to visit computer clubs, read articles abd found out about EMO subculture. In the technical school, I met the first friends that didn’t judge me on my appearance.”

”I tried to leave home as often as possible. I lived in Saratov, Nizhny Novgorod, Krasnodar, staying with acquaintances to avoid an atmosphere [at home] of screaming and hitting. I hope to never return to that nighmare.”

”A year ago, I began to organize outings for youth and not just those belonging to EMO. I have certain rules: no alcohol and no insulting others. Like myself, many of them have arguments with their parents or feel misunderstood by others. These meetings are like a break from the difficulties. I don’t let them stop believing in themselves.” 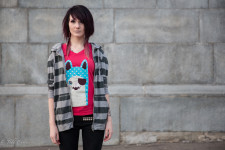