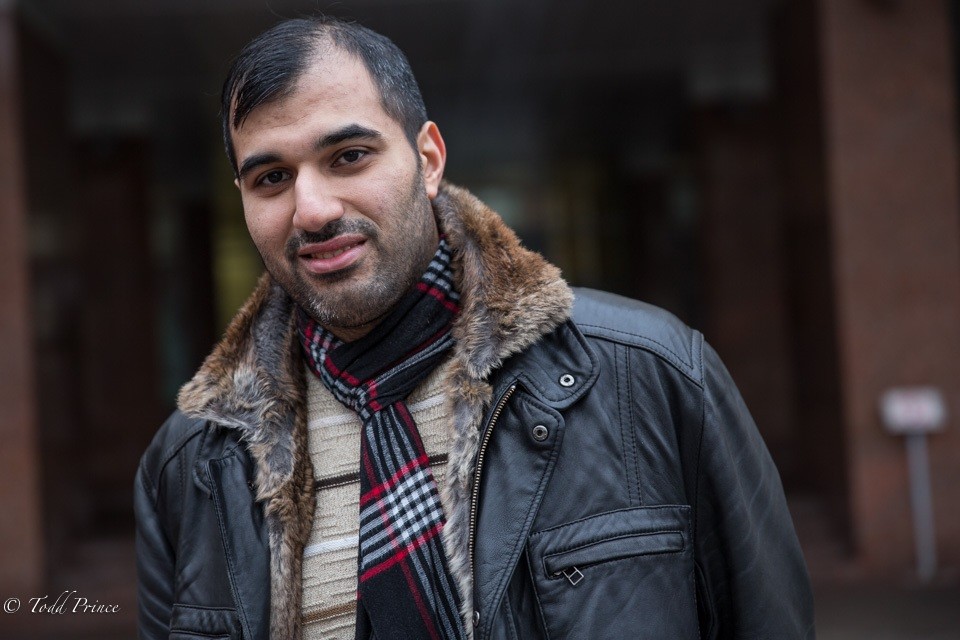 I had just taken a photo of a guy selling coffee from a ‘coffee van’ when this guy came over, a briefcase in hand. He started asking the coffee guy what I was doing, so I turned around and told him I was working on a Russia photo project. He said he was from Azerbaijan, but moved to Russia some 10 years ago and has Russian citizenship. I then asked if I could talk to him and photograph him for my project. He said yes and insisted on speaking English with me. He said he has a family clothing business, buying goods from China and selling them here. He said the clothing he was wearing – the jacket, scarf and sweater – was exactly the stuff he sells. He said he only buys his family the clothes that he sells. He said things have been a bit tough with the ruble move, though you would never guess that by the positive mood that he was in. He said he was working on 20 contracts with shopping centers in Russia, but the deals fell through after the ruble dropped. As we were talking next to a university, I asked him to stand in front of it so i could take his picture. A university guard came up and said we couldn’t photograph. We asked why. ‘’It’s not permitted.’’ What are we doing wrong?’ I asked. He repeated that it was not permitted, throwing in the ‘’What can I do, this is Russia’’ excuse as he shrugged his shoulders. The Azeri – perhaps in reaction to the guard’s concern – then asked me if I was writing ‘compromat’ – or dirt – on Russia. No, I told him. He was relieved I was not doing compromat and we went to another spot to photograph. He then asked if he could take a photo with me. I said sure. He walked over to the guard and asked him to take our photo, but he refused. So, he walked over to three students – two guys and a girl – and asked them if they could take our photo with his phone. He told them I was American and was doing a photo project, adding it wasn’t compromat. The girl giggled. One of the guys took the phone and photographed us. He then gave me a traditional handshake and departed.