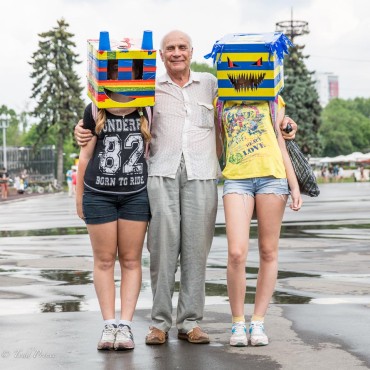 MOSCOW:  These two sisters from Vladivostok came to visit their grandfather in Moscow. He took them to VDNKh Park, where one of the current exhibitions is about robots. The exhibition - as I understand - lets visitors make their own robot helmets from boxes. Many young people - including these sisters - were wearing the cardboard helmuts for fun as they walked around the park. I took one photo with the helmets and one without. 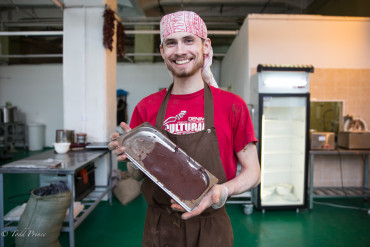 MOSOCOW: Ivan, 27 and a Vladivostok native, hand makes chocolate in a former Soviet factory in Moscow with his girlfriend Dasha, who was doing the evening shift after him. Ivan, who was raised my his mom and older sister, said he moved to Moscow for a second time in 2013 to pursue music. He explained that he fell in love with rap as a teenager in Russia's Far East after having randomly bought an Eminem cassette at a kiosk some 15 years ago while bike riding. Ivan said he then met Dasha, also a Far East native, through social media in the autumn of 2013. They only met in person in 2014 as she fly through Moscow on route to India. She would later that year move across 7 time zones to be with him in Moscow. Dasha loves making pottery and found work in Moscow producing ceramic vases and dishes. Ivan said he came to visit her at the shop, enjoyed the process and gave it a shot. Dasha then found the job making chocolate at the factory and brought over Ivan. The two switch shifts, overlapping two hours during the day. Ivan still pursues music after his chocolate shift....and occasionally makes pottery with Dasha in their free time. When I asked Ivan what he will be doing when he turns 30, he said "definitely making chocolate and music."

Anya, Nelli and Nastya were walking in the center of Vladivostok, each wearing a trendy black winter hat with the words 'BOY,' 'New York,' and 'Vogue' written on them. The teenagers said they - like many others in the Russian Far East - would like to move to St. Petersburg, where the cost of an apartment is similar. ''There are more prospects for artists there and it is more developed,'' said Nastya, who loves to paint. ''There are more museums, plenty of places to walk around and it's close to Moscow.'' 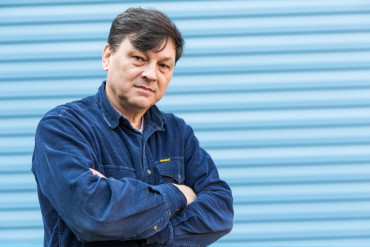 Sergei, 57, a Vladivostok journalist, has shelves at home filled with American films and western music and he knows rock-n-roll better than many westerners. He recalls the years albums were published and how many albums various groups recorded. The Beatles and Led Zepplin are among his favorite bands. He has coffee table books on The Beatles and Rolling Stones with photos. It doesn't mean he shares the same affinity for western or American policy. ''American culture is close to me - movies, music. I grew up on it. But I separate Americans and American culture from the American government.'' 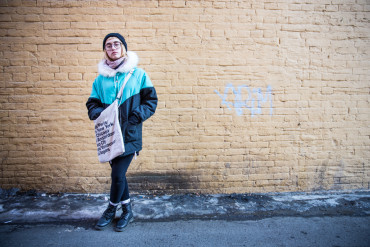 Lera, a Vladivostok high school student, was wearing black-rimmed glasses as a fashion statement as she walked the streets with her friend, both in Doc Martin boots. ''My classmates look at me oddly, '' she said, adding that she is happy to attract attention for her unusual style. Lera says she orders some of her clothing through the Internet because ''it is difficult to find interesting stuff'' at stores in Vladivostok. 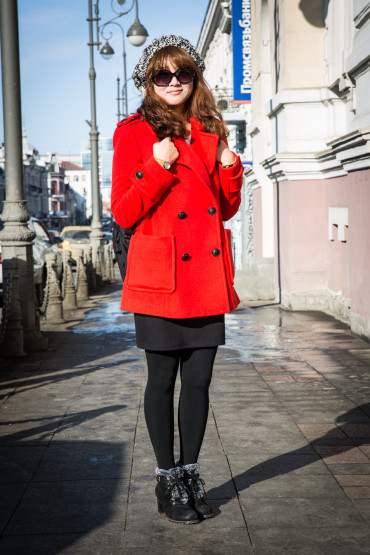 Ye Ji moved with her parents to Russia 12 years ago from Korea, living initially in Irkutsk in Siberia near Lake Baikal. She is now studying law in Vladivostok and says her co-students ''treat me like a Russian rather than a foreigner.'' Ye Ji said she is looking forward to moving back home when she finishes her university degree. ''I have lived in Russia for so long, its about time I lived in my own country.'' 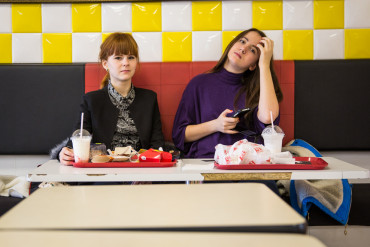 Alina (right) and Sasha were eating fast food and drinking milk shakes on a sunday Friday afternoon at Royal Burger, the McDonald's of Russia's Far East region. Alina, an 8th grader, said she liked rap and hard rock, adding that her favorite musicians were Marilyn Manson and Oliver Sykes. She said she came across Marilyn Manson and his music through the Internet.

Oleg, a gardner and coin collector, was choosing books from a shelf placed on the street in front of the Vladivostok library to stimulate reading. He pulled out two Czarist coins dating from 1777 from a small flip book to show me and photograph with. When his wife, who was standing behind him looking through books, heard from a Russian colleague that I was an American, she warned her husband from having his picture taken.

Nikita walked up to me in the center of Vladivostok and asked for a light. He was dressed in leather from head to toe and said he loved heavy metal. He said his favorite group was St. Petersburg-based metals band 'Infernal Fuck.' I asked if he had his own group. He said he played the contrabass in a folk music ensembles and always wore a traditional costume when he played such as red boots. I asked him about the contrast between what he liked and what he played. ''Metal is my style, but I can combine things,'' he said, open his leather jacket wider to show a conservative-styled gray sweater between his leather jacket and metal print t-shirt.