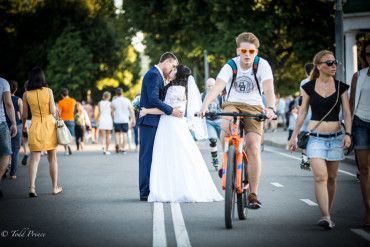 MOSCOW: Another sunny summer weekend in Moscow, another series of weddings. Many newly wed couples visit Moscow parks - such as Gorky Park and Tsaritsino - to have their pictures taken. 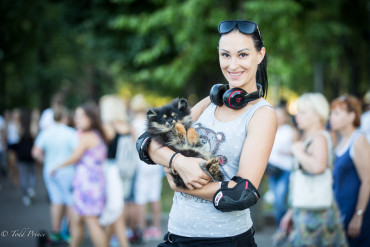 MOSCOW: Yana, 28, was rollerblading in a park, holding her 4 month-old dog to her chest as she passed a crowded area. Yana said she has been rollerblading for 3 years and normally spends several hours rollerblading in the park. This is the 3rd or 4th time she took her dog along.

MOSCOW: University students Alina and Polina were taking a walk in the park. Alina said her father landed a job in Australia and moved the family there about four years ago. Alina was visiting friends and her hometown for the first time since moving to Australia. She didn't things in Moscow had changed much since. Alina and Polina have been friends now for about six years despite the distance that separates them. Polina said she has yet to visit Alina in Australia.

MOSCOW: Timofei and Anna, 17, were sitting on a bench in a Moscow park dresses in black leather coats. They said they were fans of rock and punk. Anna said Elvis is her favorite. She first heard about him during a school class about music when she was 12. She has been listening to him since and has his albums on her phone. Her favorite song is "'Any Day Now.' Timofei said his dad likes rock, but his friends listen to punk. Thus Timofei's favorite groups are Pink Floyd, Clash and The Sex Pistols. His favorite song is 'Brand New Cadillac' by The Clash. Timofei said he style was inspired by Jonny Depp in the film 'Cry Baby' about the 1950s. 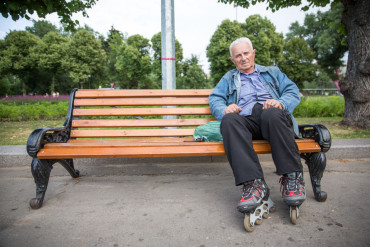 MOSCOW: Vladimir, wearing dark sunglasses, was talking to the babushka sitting next to him on a bench in Gorky Park as he took a break from rollerblading. The career machinist said he took up rollerblading three years ago at the age of 75 because he had always been good at ice skating. ‘’I taught myself to rollerblade,’’ he said. Vladimir said he first put on a pair of wooden skates around the age of 7 while growing up in Tver oblast. The wooden skates had a thin piece of metal wire at the bottom. He would hold onto a rope and be pulled. He said he recently taught a woman in her 30s to rollerblade. A master of sports in shooting, Vladimir said he will turn 78 in September. When I took a closer look at the photo, I noticed a metal ring with a skull on it, the type you might see a rock music fan wearing.

MOSCOW: Christiana, 15, was sitting at Gorky Park with friends on a recent weekday. Christiana, who enjoys evening walks and the Arctic Moneys, attends a high school that has a special focus on English with 5 lessons a week, each lasting 45 minutes. She also takes 5 private English classes a week, each lasting 1.5 hours. Though the start of a work career is many years off, I asked Christiana about future plans. She said she would like to become a journalist as she enjoys conversing with different people. 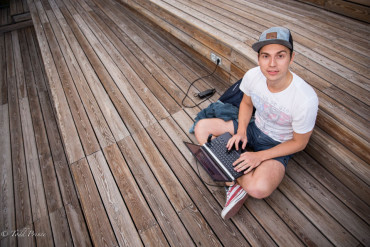 MOSCOW: Vladimir was sitting in the outdoor movie theater at Gorky Park by himself typing away at his computer. Vladimir said he grew up in St. Petersburg, but moved to Moscow several years ago for work. Vladimir said he works as a financial investor for a company that makes private and public investments. He said he likes to come to Gorky Park to work and chose the theater as it was quiet and because he could charge his computer. 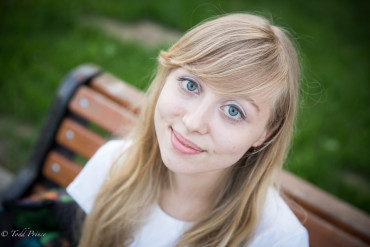 MOSCOW: With graduation time upon the city, young Muscovites have to decide what university to enter and what to study, a decision that will impact the rest of their life. Tatiana, who was reading 'Idiot' in Park Gorkovo on a sunny, weekday evening, said she wants to work a year and think things over before making that very important decision. She is considering studying acting. 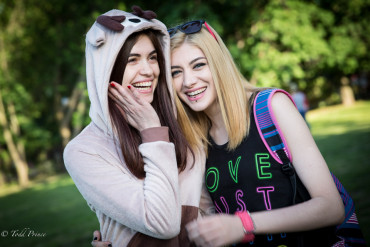 MOSCOW: Siyana and Mila (right), Dagestan natives both studying in Moscow, were hanging out at Gorky Park on an early evening when I noticed Mila’s legs were covered in tattoos. Mila, 19, said she wanted a tattoo from about the age of 11, but only got her first one the day after her 17th birthday. She had it done in Moscow, where she was attending a rock concert. Her tattoos clearly give away her music taste…hard core. As it is uncommon for females in Dagestan to have tattoos, Mila said people in her home town sometimes mistake her for a visitor. Mila would like to have a career in the arts, preferably acting. In the meantime, she has begun learning to play the drums. 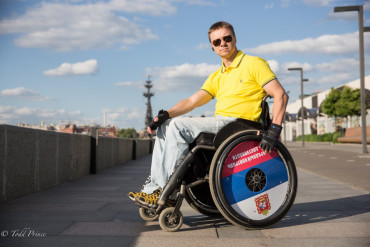 MOSCOW: Igor was getting around by himself at Gorky Park. It is such a rare thing to see people in wheelchairs on Moscow streets - especially alone. Igor, 42, said he was checking Gorky's accessibility for disabled people. Paralyzed from a car accident 20 years ago, Igor said things have gotten better in Moscow for disabled people - such as the appearance of taxis with lifts. Igor, who drove to the park in his car, has been working for the past 16 years making wheelchairs for active people like himself. He is now the deputy CEO. The CEO and founder is also a disabled person. Igor was proud to have attended the Sochi Paraolympics to cheer on friends, some of whom I suspect used Igor's wheelchairs at one time.