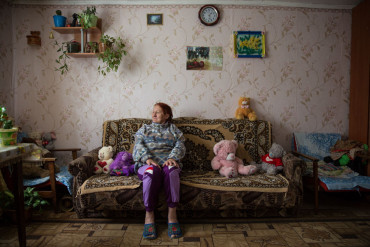 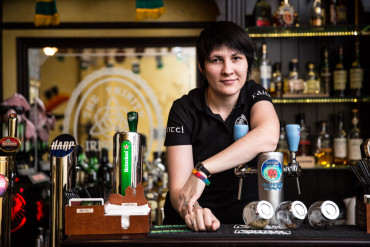 KAZAN: "I winced and spit," said Alyona, 26, recalling the first time she tried craft beer at the bar she works at. However, with time, she came to enjoy such brews. After returning from a vacation, she decided she wanted to have her own business and not just work at an Irish pub. After speaking with a friend, they decided to open a bar specializing in craft beer. The bar opened in May on the popular Baumen street in Kazan. The bar offers about two dozen Russian craft beers and foreign brews as well. Alona splits her time between working at an Irish pub, where I photographed her and the small craft-beer bar. I asked Alyona how her family reacted to her becoming a bar owner. "My mom was scared, she was worried that I would lose all my money. She doesn't understand that I am doing well." 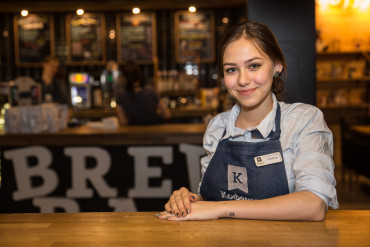 KAZAN: As I walked in the center of Kazan, I noticed three or four clastrophobia quest locations. Elina said that their popularity has spiked over the past year and more quests continue to appear. She plays a few times a month with her friends. ‘’I used to play computer games and quests give me the feeling of being inside such games.’’ She also participates in a stand-up comedy team, having first created her own as a young teenager in school. Elina enjoyed watching the stand-up group comedy competitions on TV and decided to give it a shot herself. One of her favorite comedy groups heard about her and invited her to join them. ‘’I was so surprised and happy, I agreed with great pleasure.’’ She has traveled with her team to other cities to compete and last year they won the Tatarstan league competition. Considering her ability to perform before the public, it is not too surprising to hear that Elina would like to work on TV. 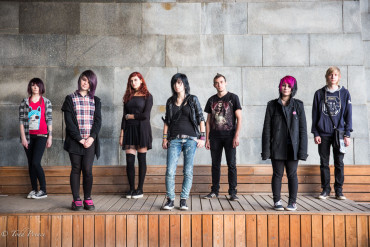 MOSCOW: Russian fans of emotional hardcore find each other on social media pages and regularly meet. This group met a metro station and then walked over to a park, where they hung out for an hour to talk and play. 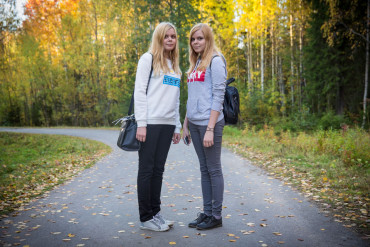 ARKHANGELSK: "We are not alike in character. I am more creative," said Nastya (left) about her twin sister Vika. They were walking in Malye Karelya, a park on the outskirts of Arkhangelsk city filled with historical wooden architecture from Northern Russia. Nastya said she loved to write poetry and would read it to Vicka, but she didn't show strong interest. "She is far from [poetry]," said Nastya. 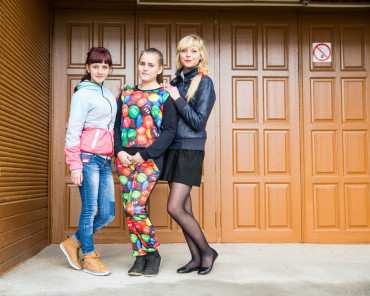 KARGOPOL, NORTHERN RUSSIA: "First I wanted to study medicine, but then changed my mind as I am afraid of all that (injuries, blood)," said Irina, 16, in the center in the M&M-print with her classmates beside her. She was walking with her friends through the town in the late afternoon after classes.  Born in a village in Northern Russia, she moved to a town (pop. 10,000) to study at a college with plans to become a teacher. She lives with her older sister and hopes to move further north to the city of Severodvinsk, military town on the White Sea. "There is no work in the village. I need to get into this world." 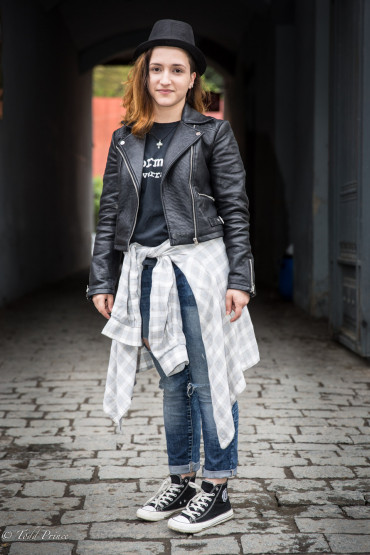 TBILISI, GEORGIA: Anna, 19, stuck out from the crowd with her black hat, leather jacket, ripped jeans and converse sneakers. She said she liked rock music, like the Scorpions and Pink Floyd. Anna, who is half Russian, she said she would like to become a veterinarian and attend university in Russia. She said her uncle, an architect, has worked on the Moscow metro. 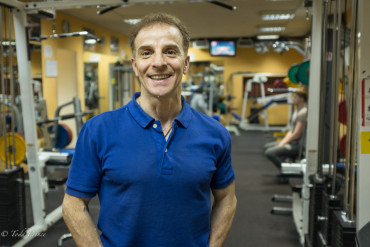 MOSCOW: It will be hard to find someone to tell you more about the history of bodybuilding in Russia than Valery, who has been working as a trainer for about 25 years. "Before 1993, there wasn't one fitness club in Moscow, just basement gyms" said Valery, who added he was among the first graduates of a 6-month state bodybuilding training course in 1988 that was titled 'athletic gymnastics.' Valery started working then in a so-called 'basement gym,' which resembled gyms in the documentary movie "Pumping Iron." 'Fanatics' mainly visited such gyms in those days, he said. Valery recalled how he and others would ask friends to bring back bodybuilding magazines from the US in those days. They would spend time trying to translate them. The modern 'fitness' gyms like Gold's Gym that started opening in 1993 were initially ''very expensive'' for the average person, he said. He said the people coming to his gym began to change around 2000 as women, students & regular guys signed up amid a change in attitudes toward health. Basement gyms were no longer the provinces of the fanatics. During the difficult days of the early 1990s, Valery - like many others - said he sometimes flew to Turkey to buy goods for resale in Moscow. The history of Valery's family is no less interesting. An Assyrian, his ancestors arrived in Russia 100 years ago with Czarist soldiers as they fled genocide by Ottoman forces. 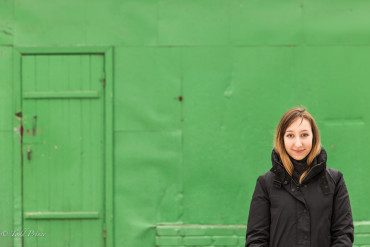 Maria, 25, who is finishing her 6-year degree in graphic design in Ulyanovsk, is one of the few Russians not keen about traveling to Europe, a destination cherished for its well-perserved, historical towns.

Maria said she is rather passionate about the world of the future, which inspires her graphic designs, and chose to visit Dubai and Hong Kong, two cities known for their modern skyscrapers, on her first overseas trips… 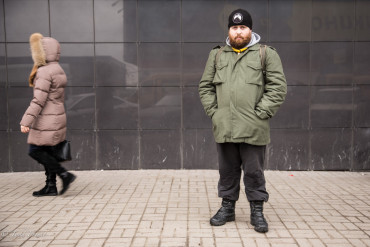 Igor, 28, was walking in the center of Ulyanovsk wearing a winter hat with the portrait of Nestor Makhno, a Ukrainian anarchist who fought the Red and White armies during the Russian Civil War.

A journalist for a local pro-government newspaper, Igor said he also owns a shirt with the portrait of Stepan Razin, a Cossack rebel that fought the Tsarist government.