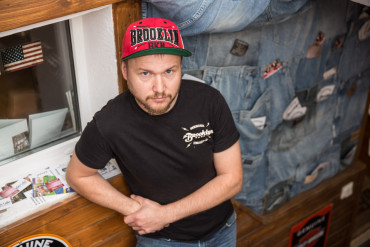 St. Petersburg: 'Brooklyn' clothing store in St Petersburg specializes in American clothing like Levis and Dickies. Brooklyn was opened by Artem, a 39 year-old local businessmen, about two years ago. Artem said he was involved in oil and gas and traveled often to Huston, sometimes stopping in NYC, explaining how he came up with the name. Since 'Brooklyn' was opened, the US dollar has nearly doubled versus the Russian ruble, making such clothes as Levis and Dickies twice as expensive. Thus, 'Brooklyn' has added Russian made clothing, including bow ties. Artem, who has spent some time in Brooklyn, would like to open an old-school gym in St Petersburg like Brooklyn's Gleason's, where there are Russia-born trainers. He explained his reasoning by saying that boxing - as well as a healthy lifestyle in general - has become more popular in recent years. 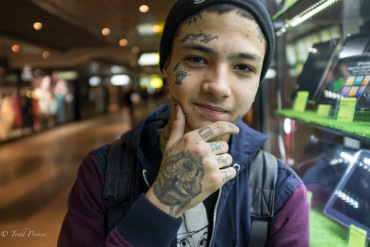 Sergei was crossing the Moscow River near the Moscow Financial District via a pedestrian bridge when I passed him. He immediately caught my eye as his face and hands were covered in tattoos that he said he designed himself. Sergei said he was turning 18 next month, unemployed, but looking at any job offers. I asked what he would like to do, mentioning that the tattoos would limit the jobs he could find. ''I would like to become a model,'' he answered. He said chest and legs were also covered in tattoos and that his brother was living in Brooklyn....not far from my home. 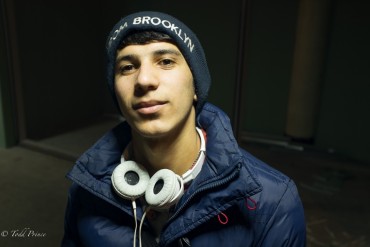 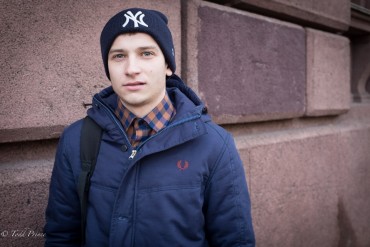 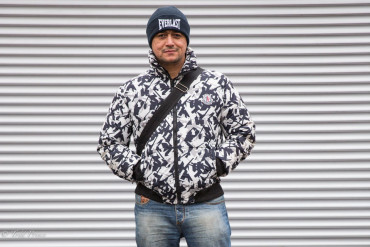 Moscow Portrait: Normally, I walk up to people and ask to take their photos. He walked up to me as I ate a pirozhki near a Kiosk and asked "are you a journalist?" I have been asked that quite alot over the years in Russia and I assume it is because I am a foreigner carrying a camera in a non-touristic neighborhood/region. He told me an interesting story, though I have not sought to verify it. He said he was from Bukhara in Uzbekistan and fled for fear of arrest. He said he often criticized his government, that one of his brothers is in jail while another is living in my hometown of Brooklyn, having received political asylum. He said he hopes to get political asylum in Europe or the US. In the meantime, he lives in Moscow working as a volunteer at an NGO. 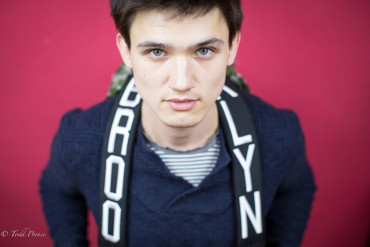 Albert, a 3rd year economics student, works part-time as a salesman for Russian clothing chain 21Shop on Old Arbat. The chain sells a mixture of colorful Russian and foreign 'street style' clothing and accessorites, including this schoolbag with 'Brooklyn' written on the straps. 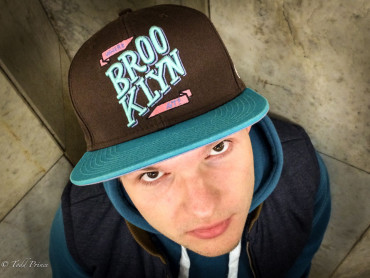 Alexander was in the metro on his way out on a Friday night when I noticed his ‘Where Brooklyn At’ baseball cap. He said his work actually has him focused on the Asia-Pacific region rather than across the Atlantic. He said he occasionally moonlights as a DJ at small spots in the city. 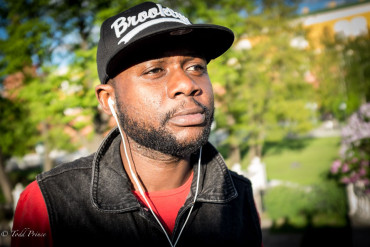 Gino was hanging out with a friend in front of the Kremlin wall in Moscow on a sunny summer evening in his Brooklyn hat. Gino, who speaks very good Russian, said he and his friend were from Congo and that he has been living in Russia for about 5 years. He said his mother lives in Washington, DC and he hoped to visit her this year. His says his future plans on where to live and what to do are still undecided. 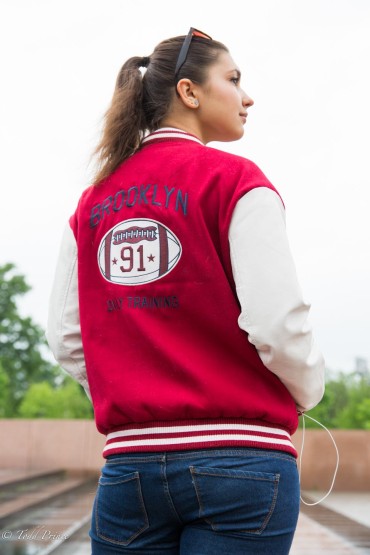 Karina, a political science major, was walking toward a Moscow park with friends when I saw her in her Brooklyn jacket. This looks very much like a real Brooklyn highschool football, something that Travolta and the gang would have worn in the TV serial "Welcome Back Kotter." 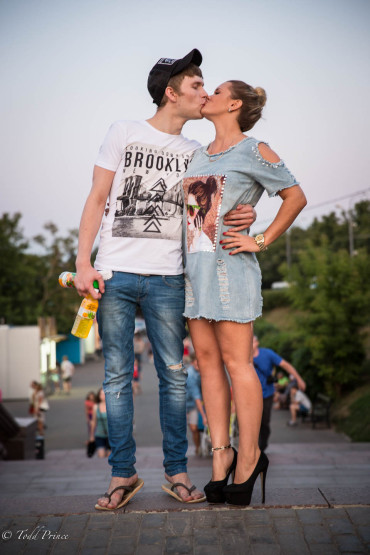 Anton, sporting a Brooklyn shirt, was walking with his girlfriend Katya toward Sparrow Hills, which offers one of the best views of Moscow, when I bumped into them. While taking a few photos, Anton suddenly turned toward Katya and kissed her.