KAZAN: “I am trying to find myself – what i will love to do everyday,” said Danil, 26, who is training to become a barber. He said he is looking for a job that will not just bring financial satisfaction, but emotional as well.

His mother, a professor of Russian, is sympathetic to his search and calls him regularly to find out how he is progressing at the barbershop. I asked Danil, who traveled around the US and speaks good English, what he would like to change in his city.

“I wouldn’t change something in the city, rather I would change something in our minds and behavior. The world today is far from being an effective system and it ain’t hard to see that. Just look at the wealth distribution for example. It looks like a game of chairs, where we have 12 players, 12 chairs and 1 person occupies 11 of chairs. The real problem is that we believe that the world can’t be better.”

He apologized for such a philosophical answer from a young man that hasn’t achieved anything, but he said he wanted to get this point across to others. 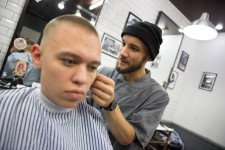 Danil at work at the barbershop. 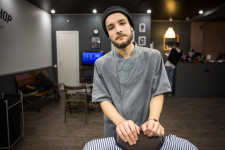 Danil said he is trying to find himself.