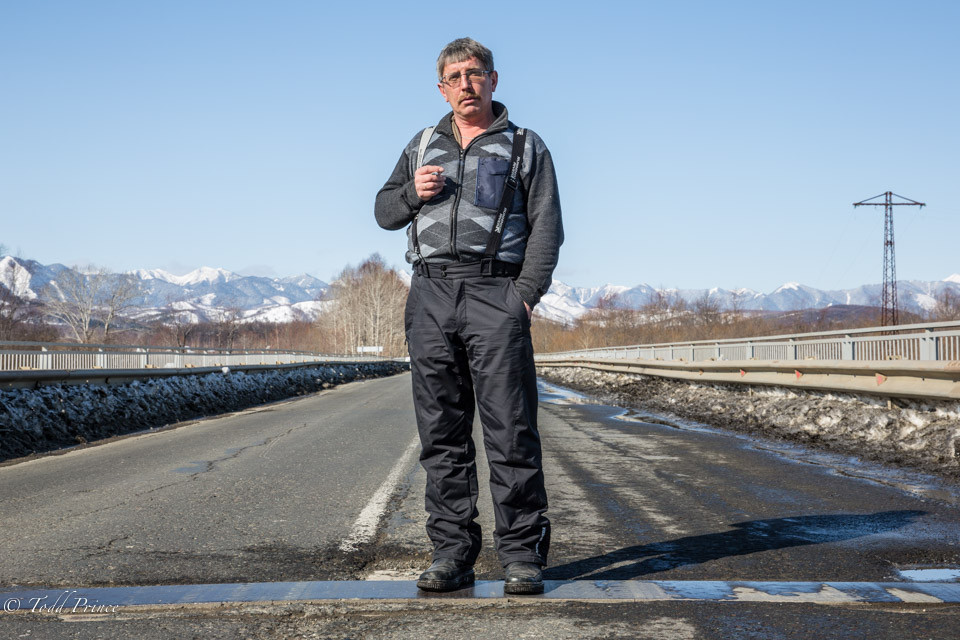 Dmitry, 45, overheard my conversation that I was looking for a driver to show me around Poronaysk town, so he came over and volunteered his services. He would spend the next two days showing me around. When he invited me for tea afterward at his apartment in a grey, Soviet-era building, he said ”you will see how the average Russian family lives.”

Dmitry said he moved to Sakhalin with his mom as a young boy from Siberia after his father drowned. He went to work for a pulp and paper factory after schooling, but that company went out of business during the Russian economic turmoil of the 1990s. He then joined the Russian military in 1993, serving three years. The military food rations were large at the time and ”lasted a year,” Dmitry said. ”Unlike many others, we lived fine during the 1990s.”

He recalled how during the 1990s bread prices jumped from 22 kopeks to 30 seemingly overnight and then as hyperinflation took over, it was soon up to 350 rubles for bread. ”The ruble was devaluing right before your eyes. Price rose so quickly, people were in shock.” The ruble salary he was paid were now in the millions.

He said he left the military after conditions got worse. His food rations was changed. The six cans of condensed milk were switched to six cans of fish, something that Sakhalin locals could catch for free. In 1996, he joined the local fishery, where his mother had been working every since they arrived on the island. He is now an owner in that fishery cooperative. He works about 8 months a year on the fishing boat, limited by weather and fishing quotas. He gets to work at 5am.

Dmitry lives with his wife and her 11 year-old granddaugher Diana, whom he refers to as his second daughter. Dmitry said that when his stepdaughter gave birth to Diana at an early age, he and his wife decided to raise Diana themselves. You can read about Diana here.

Diana’s natural mother lives in the same building a few floors higher with her husband and second child. Dmitry’s wife and stepdaughter make baked goods from that apartment and sell it locally. In addition to the apartment, Dmitry has a dacha outside of town, where his wife grows vegetables during the short, warm season. He is building a banya there.

After he dropped me off at the train station, Dmitry asked for the sum we had earlier agreed upon – a sum that would have covered at best the gasoline and food he served us. He said he was happy to have met a foreigner and gotten the chance to show his town.