LAKE BAIKAL: In a village alongside Lake Baikal, you can find Dmitry, a 33-yo sculptor, working away with metal in his crowded garage.

The son of a landscape painter, Dmitry makes cartoon-like figures from the metal he mostly finds lying around the region. He joked that he thus helps tackle one of Baikal’s biggest problems – garbage.

I asked Dmitry if there was a ‘philosophy’ or ‘idea’ behind his work.

“I wouldn’t say there is a philiosophical meaning. My sculptures are simply kind, good-hearted objects. I want my sculptures to lift people’s spirits and put a smile on their face.”

Dmitry said he hopes to have another solo exhibition some day.

Dmitry and his father, Vladimir, 63, collect old cars and motorcycles around the Irkutsk region and have more than 20 vehicles scattered around their plot of land near Baikal. Among their prized possessions is a 1938 GAZ.

Dmitry said his house burnt down two years ago and has fallen behind in fixing up the cars and motorcycles. He said if he doesn’t find the time, that he will leave it to his son to do.

”There is so much to do and so little time.” 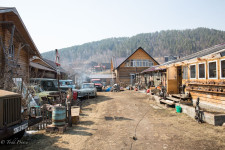 Dmitry and his father live and work on this plot of land near Lake Baikal. 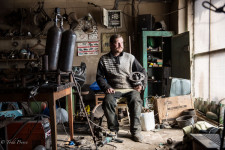 Dmitry in his garage holding one of his sculptures. 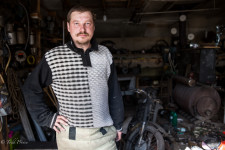 Dmitry is the son of an painter. 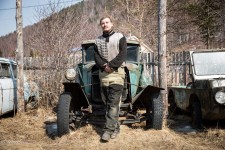 Dmitry standing in front of the 1938 GAZ automobile, one of some 20 old cars he has collected over the years. 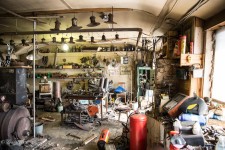 Dmitry said he has gotten behind in his work due to a fire that destroyed his house. 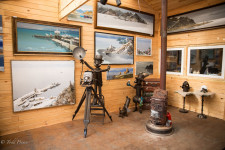 Dmitry’s sculpture standing against a wall covered in paintings made by his father.