Irkutsk: Aslan, 16, was smoking a cigarette near some old wooden homes in Irkutsk, dressed in an all black sport outfit. He said he was born in Grozny, Chechnya in 1998 and immediately moved with his family several thousand kilometers to Irkutsk. Did his parents sense something or was it luck that they moved in 1998? A year later, Grozny would become a horrific war zone. Aslan isn’t quite sure what path his life will take – he says he is interested in the medical and oil industries – but he knows where is life will end. “Grozny is my hometown. I was born there and I will die there,” he said with pride. 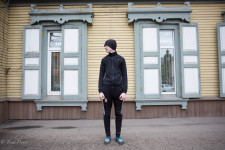 Aslan standing in front of a wooden home in Irkutsk. 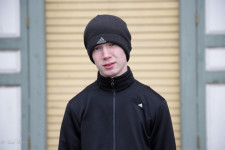 Aslan wants to move back to Grozny, his birthplace.