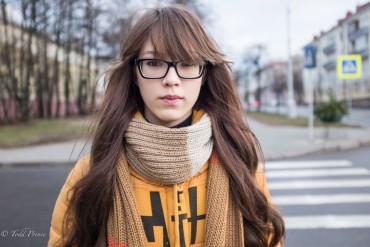 Valeria, 17, said she is a big fan of Japanese culture and wanted to study the language at university. As it wasn't offered at university, she signed up for Chinese, the closest thing in her view. She said every Friday fans of animation in Minsk meet, which is where she met her boyfriend. She said 'finding her soul mate' was the most important event in her life in 2014. 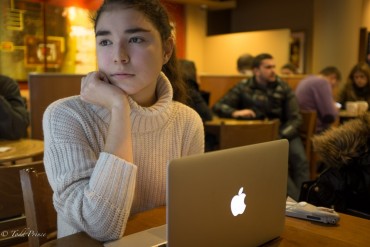 Anfisa, the Starbucks-loving and Iphone-toting Moscow teenage blogger, was born in the USA and has a native Chinese grandfather (perhaps the result of Russians escaping to China after the Communist revolution). One of six children, she said she has been drawing from an early age, inheriting some skills from her dad and Russian grandfathe, a sculptor. 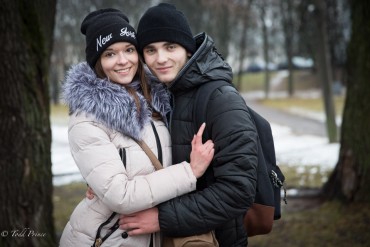 Katya and Vitali, 18, were taking selfies near a Minsk metro when I saw them. I asked Vitali what the most memorable event was in his life in 2014 and he basically answered 'right here, right now because Katya and I have met.' I asked him what he meant, and he answered that they met a few months ago via social media and wrote often. They met for the first time that day I photographed them. I asked what they had in common. "Everything," Vitali answered.

He was selling New Year's gifts in Minsk near the tractor factory, a less attractive part of the city. He said he put up his Christmas tree on Dec. 1, like he does every year. But this year, his girlfriend helped him clean up his apartment, throwing out alot of his old stuff. He said it was the best days of the year. He told me he rents the apartment basically for free - part of a state sponsored program to help orphans. He said his parents are alive...and that as a child he admired his dad .... But alcohol and crime changed everything. He said he has seen a lot, but tries to keep a positive outlook on life. However, he said many orphans will succumb to crime and drugs because they look up to gangster types. 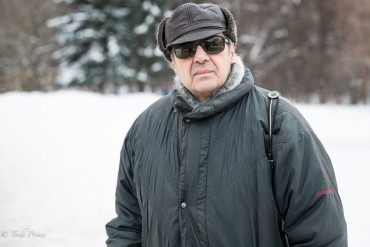 Before I continue with my Minsk photos, I want to post a two portraits from last 24h in Moscow to show how very different people were spending the holiday. I met Stanislav, a 77 yo accordion player, nearly a year ago at the Izmailovsky souvenir market, where he plays as tourists and Russians pass on their way to buy gifts. Today, I randomly saw him in the underpass near Izmailovsky as he dragged his accordion on a cart with one hand and used a sightseeing stick with the other. He had come to play for the holiday crowds, but the market was closed, so he was trying to find a populated place near the park. Nearly blind due - as he put it - to a bad operation, he says he won't stop playing regardless of how difficult it is to drag his stuff through the snow. "If I stop playing music, I will die. It is a holy cause." He said he was proud of his daughter, who has followed in his musical footsteps and often tours Europe to play. 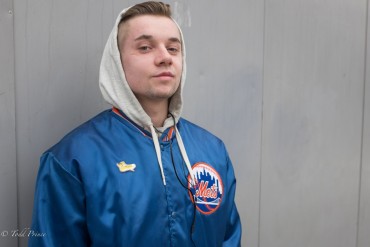 For forigners, there is one NY baseball team: the Yankees. I have seen hundreds of Yankee hats around the former USSR...in large part because it represents to them NY, not a baseball team. So, when I saw Alexander standing against a kiosk near the Minsk tractor factory in this hip Mets jacket, I had to find out his story. He said he was a good high school student and thus got to study in college for free but with the obligation to work his first two years for a state-owned company. He is working for a machine building factory and likes to spend his time rapping. He said he raps for friends and his 'neighborhood,' a word that I rarely hear people here mention. So I asked what he meant by neighborhood. He said the tractor factory area where he lives is like an old, forgotten ghetto. That is why I was there - I heard it was a depressed area in Minsk. Alexander said he was inspiried by Onex's 'Slam' and wanted to recreate something similar incorporating his reality. He said he would love to visit the US to experience first hand rap and hip-hop culture, but said it was too hard to get a visa. He thought if he tried to explain to the embassy his reason for visiting the US, "they would think its total bullshit." 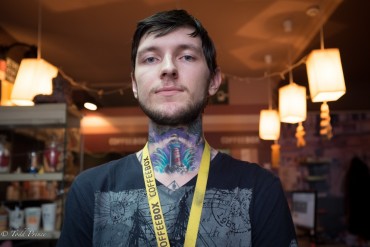 Roman, a barista at a Minsk coffee shop, had a lighthouse tattooed on his neck. He said "a lighthouse is a symbol of hope to sailors" and for him it is a reminder to see hope around him 'and not to despair.' He said he studied medicine and then worked in physical therapy, but didn't stick with it as the pay was so low. I asked if he made more as a barista. He said as much as double. 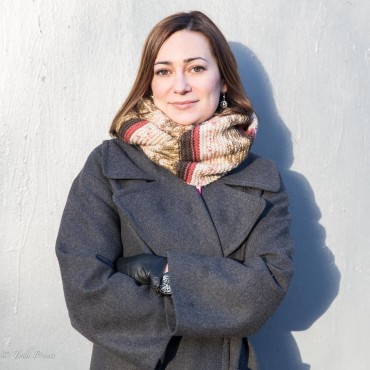 I will post a few portraits from a short trip to Minsk, Belarus that I hope will shed some light on the people and the country. I will start it off with Vera, whom I randomly met when I lost the keys to the flat I was renting in Minsk. Vera told me her great grandfather left Czarist Russia to work in a Canadian mine to help pay off land debts. When her g-grandfather returned, he discovered that his wife had left for Moscow with the money and a lover. He remarried at 40 and had six children, one of whom died in a concentration camp during WWII, which took the lives of at least 20% of the population. One of the six - her grandmother - is still alive, age 90, and lives alone in a village, something not uncommon. Vera commented that Belarusians still migrate abroad for work much like her grandfather did a century ago. Indeed, quiet a few of the people I spoke with in Minsk considered working abroad as salaries at home are quite low. As for the lost key, it had the address written on it. When the flat manager arrived to give me a new key, I raised the question of paying for a new door lock. He was relaxed 'Minsk is quite safe. The person who finds it will be too scared to try robbing the flat.' Four days later, no one but myself entered the flat. Minsk indeed seemed to be a safe city.