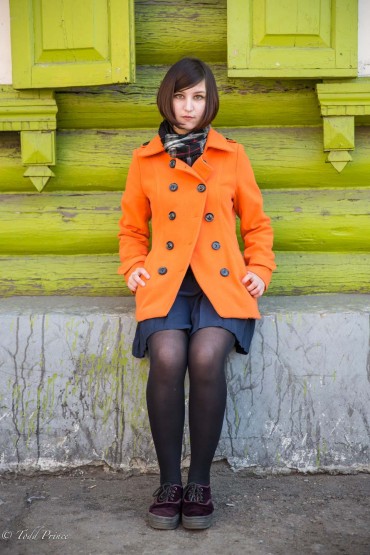 ULAN-UDE, EASTERN SIBERIA: Elvira, 16, is a high school student in Ulan-Ude. She said she would like to become a journalist and hopes "to travel and write about people's lives." She said she has never been abroad and would like to visit England. 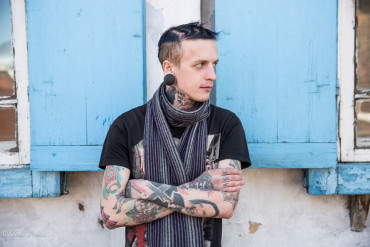 ULAN-UDE, EASTERN SIBERIA: Sergei, an IT specialist for Russia Post, said his physical appearance began to change three years ago after a stroll with his older sister along 'Arbat Street' in Ulan-Ude. "She told me she wanted a tattoo and I said I wanted one as well. I simply wanted a change in my life." He then got one ... then a second, a third and so one. He has about 30% of his body covered in tattoos, but doesn't plan to stop. "I want to cover my whole body," he said. One of his favorite tattoos is a portrait of singer Marilyn Manson (visible on his arm). Sergei said he loves his job and his colleagues, and that one of his dreams is to take a long road trip by hitchhiking. 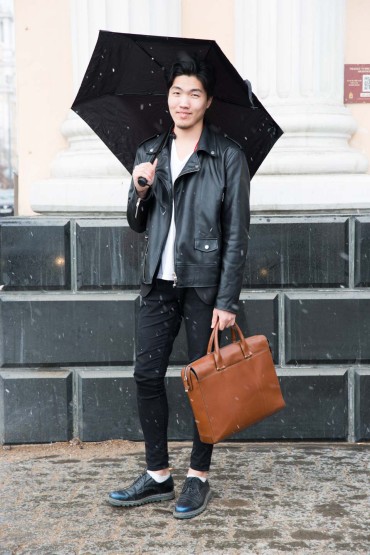 ULAN-UDE, EASTERN SIBERIA: Damba was dressed in a t-shirt, thin black-leather jacket and short socks as he walked around Ulan-Ude. The snow started to fall as we chatted and he pulled an umbrella out of his bag. He said he was a foreign language student snd spent one-year in St Petersburg. Despite his looks, he says he isn't interested in fashion. 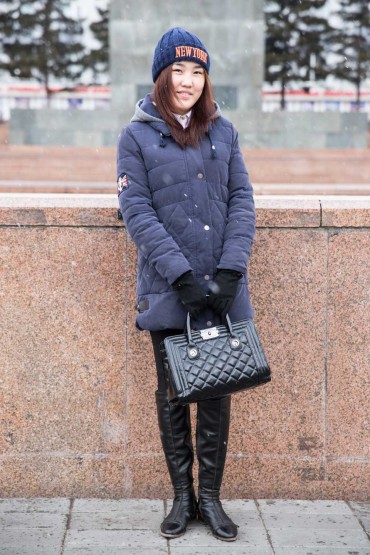 ULAN-UDE, EAST SIBERIA: Light snow was falling as Medegma, 18, waited for a bus in the shadows of the largest Lenin head in the world. Sporting a New York winter hat, Medegma said she moved to Ulan-Ude from a town about 800 kilometers away to study economics. However, she said economics isn't her passion, so she thinks she will join Russia's armed forces after graduation, mentioning the interior ministry. Medegma said she studied Buryat national dances, loves melodramas and reading, adding that she will reread some books. Her favorites are War & Peace and Quiet Flows the Don. 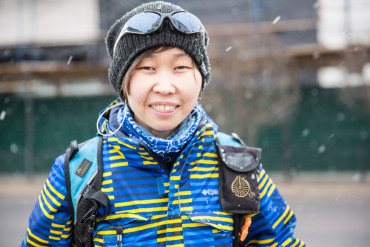 UlAN-UDE, EAST SIBERIA: Zoya, 28, was riding what looked like a mountain bike in the center of Ulan-Ude just as snow started to fall on this day in late April. Zoya said she heads the Ulan-Ude bicycling community that she created three years ago. It all started when she began biking by herself around the city. She soon became friends with other bikers and they began to organize day rides outside of town. Thereafter, she decided to set up the community with one of the goals being to get drivers and the government to accept that bicyclists "have the right to exist." Drivers still tend to block bike riders and there are no official places to park bicycles, she said. Zoya said biking has become more popular in the city in the last few years - justifying in her view the parking spots. Her Ulan-Ude bicycling community social page has nearly 2,000 followers now. Zoya said the local government has set aside 150,000 rubles to create bicycle parking spots around Ulan-Ude this summer. Zoya said her dream is to take a long ride through Central and East Asia. When I asked if she would ride back to Ulan-Ude from Asia, she said no as "Russian roads are dangerous."

ULAN-UDE: As I walked around the Buddhist spiritual center Datsan outside Ulan-Ude, I saw a dozen or so students. Ochar, 16, stuck out though. He was the only one with Slavic features. He said his father was Russian and his mother Buryat. I asked how he chose to study at the Buddhist university. He said when he was 14, he helped out at a celebration at Datsan and really liked the atmosphere. I asked him how his parents reacted to his decision. "At first, my parents were against the idea. They wanted me to study at another place. But I stood my ground." Ochar said he is in his first year of an eight-year Buddhist philosophy program. 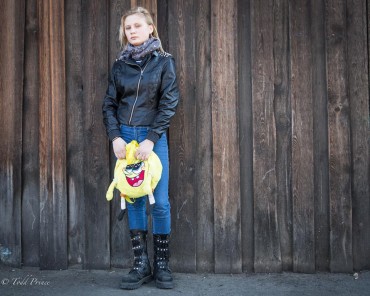 ULAN-UDE, EASTERN SIBERIA: Chris, 16, was walking in the center of Ulan-Ude dressed in big, black boots and black leather coat with silver spikes. She was carrying a yellow schoolbag that was in the form of a cartoon character. Chris said she wanted to be a "certified heart surgeon" and hoped to study abroad, potentially in Finland. She said she thought the level of medical education would be higher in Europe. I asked why a heart surgeon. "It is an amazing feeling to hold a beating heart in your hands," she said with passion, holding her hands together as if she actually had a heart. Chris added she had visited a morgue in town and "didn't experience any fear" as she walked past corpses. Chris then kindly offered to call a friend whom she thought was worth interviewing for my project. She waited with me a few minutes until the friend arrived, intoduced him and then left to finish her day. 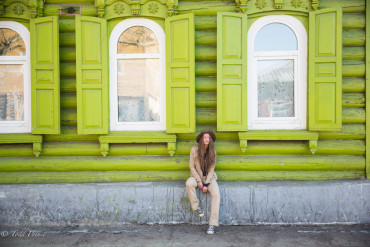 ULAN-UDE-EASTERN SIBERIA: Ulan-Ude looks unusual for a Russian city. It is dominated by wooden homes - many old - rather than high-rise apartment buildings. Thus, some locals called their city "a large village." You can view the wooden homes as a sign of regional poverty or national beauty. Lena, a native Ulan-Ude resident who loves rock-n-roll and H&M, chose the latter. She has been running an Instagram blog focused on fashion for about two years, but a little more than a year ago, she changed its style. When she posted a photo of herself in front of an old wooden home in the center of town, an Ulan-Ude resident asked where the photo was taken. "I was shocked by the question" as it was in the center of town, she said. "Thereafter, I decided to introduce my city to everyone. Why not make wooden homes fashionable?" Lena began to regularly pose in front of the colorful, old homes, attracting the attention of the photographer managing National Geographic Russia's Instagram account. He named her account of his 10 favorite. Lena said she hoped her photos will spark an interest in the city's architectual heritage. She has received a proposal to present her photos at an exhibition dedicated to Russian wooden architecture later this year. You can view her Instagram blog at @royal_lena 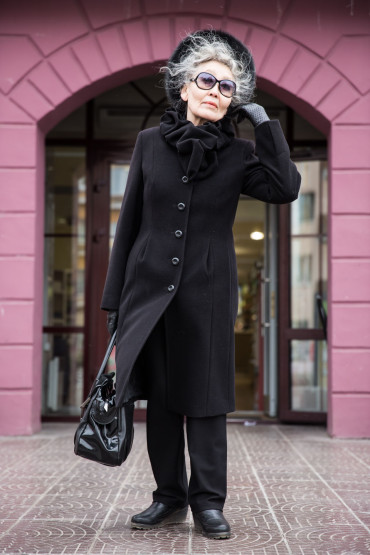 ULAN-UDE, SIBERIA: Alexandra was walking in the center of town dressed in all black, including an ethnic Buryat hat. The 70 year-old, an avid reader and Marxist, recalled how during Soviet times she once flew to neighboring Irkutsk to buy a book about American millionaires. Alexandra said her friend, who worked at the book store in Irkutsk, called to tell her they had some copies. Alexandra said she went straight to the book store from the airport and was able to get a copy of the book....but she wasn't able to get a flight back later that day to Ulan-Ude. ''I called in sick,'' she laughed. ''I told them I had terrible tooth pain.'' Alexandra said she wanted to read the book to understand the thoughts and interests of the wealthy Americans.  She said she was a bit disappointed as the book was more about their possessions. Alexandra asked me to give her a copy of the photo in the evening. When I handed her the photo later that night, she in return gave me printed instructions about which prayers I should read at the Buryat Buddhist temple in nearby Datsan. She told me to bring some milk to leave at Datsan. Alexandra called the next day to see if I visited the temple. She said if I ever have problems, "regardless if you are in Russia, Mongolia, the US or Peru" to call her and she will go the the temple to say some prayers. ''You have my number.''